DESIGNER YOU by Sarahlyn Bruck

This morning I woke up from a dream in which I was walking around my hometown library with a hamster. I was holding the squirmy creature in my hands and showing him or her the renovations the library had undergone, and explaining how the various areas used to look. I'd been using this library since age 10 and I worked there as a young librarian for seven years, so I was a good guide for this hamster. Upon waking, I thought how strange it was that I didn't have some kind of carrier for the little guy. In real life (IRL), when I transported my hamsters (usually from college to home and back), I would carry them in a clear ball, the same one in which they would roll around on the floor exploring whatever environment we found ourselves.

You're probably wondering why in the world I would start this blogpost about a novel with a hamster dream. I will make that point, I promise.

Designer You is the first published novel by my colleague at Bucks County Community College, 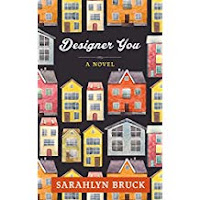 Professor Sarahlyn Bruck. As Sarah was working on this book, I would hear tidbits and clues about it, but the plot and characters didn't take shape until I began reading. I became absorbed in the story immediately. The protagonist, Pam, loses her husband early in the story (Chapter One, Page One to be exact), and the reader is compelled to read on to find out the details of this tragic death. Nate succumbed to an accident while he was building a rooftop deck for the family. After I read the details of this accident, I saw rooftop decks everywhere. Rooftop decks are a thing now, especially in urban areas. I asked Sarah about this, wondering where the idea came from, and knowing from social media that Sarah's husband was still alive and healthy. This hadn't happened to them, but while her husband was building an actual rooftop deck for their family, Sarah would worry that something terrible would happen. That worry turned into Nate's backstory.

All of this is tragic enough for our protagonist, but add to the story the fact that Pam and Nate are a well-known design and home-improvement team with books, TV appearances, and a line of stuff available through Lowe's. The name of their company is Designer You. Is Pam going to be able to keep Designer You going without Nate? Will she have to reinvent herself somehow?

Just like author Sarahlyn Bruck, Pam has a teenage daughter. This daughter has a hard time dealing with her dad's death and makes some really bad choices.These are NOT based on autobiographical elements. Other than their approximate ages, the author's real daughter and the fictional one don't share characteristics. Sarah brings that fictional girl to life, though and the relationship between mother and daughter is stunningly realistic. Will Pam be able to guide her daughter back onto the right path after some rather serious setbacks?

I'm not here to tell you how the story plays out, but I will say that the story remains compelling throughout. Pam has a lot to deal with ("When it rains, it pours") and although we recognize her feelings of self-doubt (we've all been there), she shows herself to be resourceful, agile, and strong. This is an authentic, contemporary story, rich with nuance, and as a bonus it is set in Philadelphia!

Are you still wondering about my hamster dream? 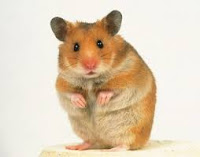 It occurred to me as I drove to work this morning (my car is my best thinking place) that when I read fiction and even some nonfiction, I'm like that hamster in a clear ball. I'm looking around at the world created by the author with all of the characters and places and nuances of detail. I'm safe in my bubble, too, permitted to safely check out the situations while the action happens. Thanks to Sarahlyn's elegant writing, I'm in the house with Pam and her daughter, I'm on the awkward date, and I'm in the basement with the contractor struggling to speak knowledgeably about that job.
Posted by Margaret at 2:36 PM

MMM's Book of the Month Club

Remember when we still read books made of paper and there were these clubs where you could get a new book sent to your doorstep every month? "If you don't want this month's book, send the card back with the appropriate box checked. If you do want the book, do nothing. It will appear in your mailbox at the beginning of the month." I used to be in the Quality Paperback Book Club and was exposed to some great books that way. For a while I was in a craft book club, and back in grad school in the 1980s I was in a classical record club that operated the same way. A person could accumulate a quality library this way.

This bookofthemonth club will work differently: I'm not sending books out to readers, but I will tell you about the best books I read. I read a lot of books because I love reading, and I read a lot of books because I'm a writer. I read many travel books, or more precisely books about place, so those will probably appear here. I read many other genres, too, and as a librarian and known book lover I recommend books to readers frequently.

Maybe you won't be interested in every book I recommend, but I hope you will check in to this book blog at the beginning of each month to see what I've got for you. It might be old or new, nonfiction or fiction, or it could be from some other genre. You'll be surprised.